Routers are the most important peripheral devices which are used for distributing data packets to multiple devices. For a stable and consistent network connection, having a good router is essential. You might be doing an online transaction or streaming a movie– if the router can’t handle the network well then the transaction may fail and constant buffering may lead to a bad experience. That is why RouterGuide has come up with the 5 best Netgear Routers which have excellent throughput and great range. Netgear has a Nighthawk line of routers which are considered to be the best in the market. You can pick the one which suits your need and can freely enjoy web content without any network drops. So without any wait let’s straight dive into the list of the best Wifi Router.

Orbi is the best offering from Netgear. It is an all-around powerful router with incredible coverage and network strength. Orbi works on the mesh WiFi system and works as a satellite unit to expand the coverage to far-fetched locations. It looks nothing like a router and has two portable satellites with a unibody design which can be kept anywhere across your premises. The Netgear Orbi is very much the gold standard when it comes to coverage with support for 5000 square feet of area. It’s a huge leap from the traditional routers.

Netgear Orbi seems a bit expensive, but if you are investing in a decade-long WiFi system which has modern features and functionality, then you should consider the Orbi without any second thoughts. Talking about the specs, it supports speed up to 1.6Gbps which makes it a gigabit router. It also supports all the security protocols like WPA, WPA2 PSK, WEP, and WPS. Besides, it has dual-band support of 2.4GHz and 5GHz which is great for old and new devices.

The Netgear Orbi also supports MU-MIMO. MU-MIMO is a unique standard which has recently been developed and it’s amazing to have such technology in our homes today. To introduce, it means multiple users can request and retrieve data from the router at the same time without any lag or performance deterioration. The Netgear Router, Orbi supports this breakthrough technology and it’s an added bonus.

Besides, it is also equipped with Beamforming technology which basically releases the signals towards the target device instead of emitting in all directions. This lets the device easily transmit data efficiently without any network drop. The Orbi also has an in-house processor for managing network congestion and providing Dynamic QoS. Additionally, it has a user-friendly mobile application to easily manage and track network activity. Also, there is an option for parental control. The next Netgear Router, Nighthawk AC1750 is a budget-friendly router that is more than adequate for light users. It supports dual bands and provides speed up to 1.2Gbps, technically making it a Gigabit router. If you want something for browsing the internet, streaming HD content then it can handle with a breeze. Among all the budget offerings from Netgear, the Nighthawk AC1750 can easily host up to 12 devices. While it does not have support for MU-MIMO, it has 3 antennas for decent range.

Among other things, it has parental control and a mobile application for easy setup. You get 4 standard ports and one USB port. You don’t have to worry about security, as it supports all the required security protocols. For a small home, this is the best router you can get. Of all the Netgear Routers, the R7500 sits at the best place possible. While it does not have the range capability of Orbi, it surely packs a punch when it comes to performance. Easily comparable to Orbi because of steady performance and great throughput of 1.7Gbps. It has dual-band support of 2.4GHz which goes up to 600Mbps and 5GHz which clocks up to 1.7Gbps. This is nothing but astounding in such a tiny package.

It has MU-MIMO support and can stream 4K video content without breaking any sweat. The R7500 packs a 1.4GHz dual-core processor for DQoS management and smooth gaming. It also supports beamforming+ technology to ensure the data packets travel efficiently without any signal loss.  All in all, the R7500 is the best WiFi router if you don’t want a mesh system. It is a standalone device with a gigabit port and USB support. Besides, there are tons of features in the app to better manage the router. 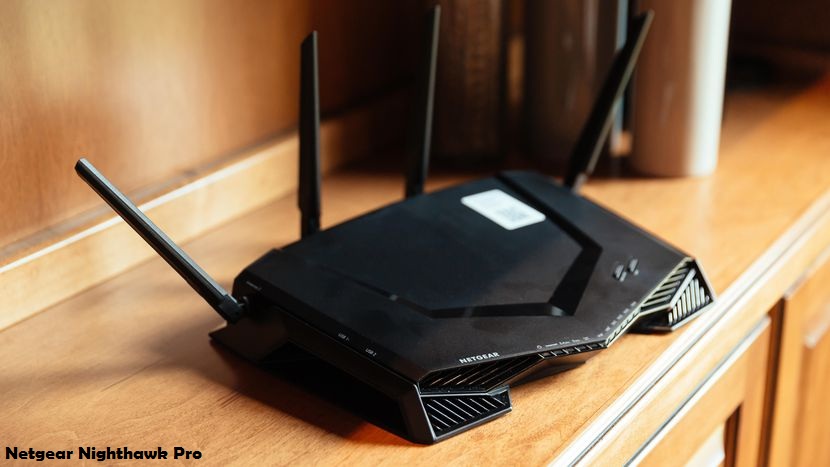 If you are a serious gamer, you should not miss the Netgear Nighthawk Pro at any cost. This Router is built especially for gamers with low-latency and break-neck performance while playing online games. There are many Netgear wireless router out there, but nothing comes close in terms of sheer performance it provides. It has a couple of extra features for gamers like game boost, extra bandwidth allocation while gaming, QoS optimization, and several helpful additions.

Netgear has specifically come up with Quad-stream technology which lets the users play multiplayer games efficiently. It supports MU-MIMO which is obvious given it is for gaming purpose. Netgear claims it can go up to 2.6Gbps combining both the bands. It also has support for beamforming technology and the ping time is very less with this router. The Netgear Nighthawk X6 is the best WiFi router for all major things combined. It has got performance, speed, range, internal hardware and software optimization. This thing can clock up to 3.2Gbps for combined bands of 2.4GHz and 5GHz. It is best for general users, gamers and can play 4K videos at 60FPS without any stutters. Given that the X6 has 6 antenna bands with 360-degree coverage, it can reach any corner of the house overriding obstruction and walls.

Sure the X6 is a tad costlier, but if you do not want to invest into something expensive like the Orbi, then this is the best Netgear wireless router to buy. This router has a range of 4000 square feet which makes it an easy recommendation for heavy users. The X6 is coupled with all modern features like MU-MIMO, beamforming, and DQoS.

If you are in the market for a good WiFi Router, you should seriously consider Netgear’s line of products. Netgear for the past decade has been an industry leader and has brought lots of innovation to the networking industry. To conclude, all of the above-mentioned routers are great in their price range. You can choose either of them and you will definitely profit. RouterGuide sincerely hope that this post helped you in finding the best WiFi router for you.